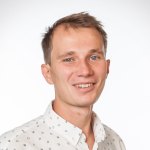 “I am honoured and humbled to accept this award. I am thankful to TU Delft and my supervisors Joost de Winter and Riender Happee for giving me an excellent opportunity to work on my PhD project and become an active member of the scientific community of Europe.”

A fragment out of the evaluation summary of EYRA of Euro Science:
Within the field of automated driving, Pavlo’s research project is to use the auditory modality as a channel of communication between human and machine. Before engaging in this direction, he launched an online questionnaire to find out how people with automated cars wish to communicate with them, and pursued the approach of asking users at various stages of his research, bringing in the practice of participatory research to the field and the tools of crowdsourcing to perform the studies. In the spring of 2017, Pavlo conducted a successful on-road study on innovative auditory interfaces with Volvo Trucks in Sweden. In his application, Pavlo included a bibliography listing seven papers or conference communications. Since then he submitted four conference papers, one of his journal publications was accepted and he made three conference presentations; and he is now finishing two publications on his recent experiments on Human Factors of Automated driving.

Beyond his research, Pavlo is a co-founder of the startup inventme, which aims at building a bridge between the worlds of academia and industry by bringing professors, their students and companies together. He is very active in the Marie Curie Alumni Association, both as the chair of the “Bridging Science and Business” working group; in that capacity, he organised an event in Gdansk in September of 2017 on the topic of balancing between business and academia, which attracted 50 researchers from all over Europe. He is the vice-president of the MCAA BeNeLux chapter. He is also involved in the Erasmus Mundus Students and Alumni Association, with the goal of helping talented students building their future.

European Young Researcher Award (EYRA)
The European Young Researchers’ Award (EYRA) is granted since 2010 to researchers demonstrating outstanding research performance and leadership. It aims to inspire early stage researchers to incorporate a European dimension and perspective into their research. The Award is granted each year; in odd years, the prize is dedicated to PhD candidates, and in even years to post-doctoral fellows. The award ceremony is held every two years at ESOF where the two recipients present their work (this year in Toulouse). The second awardee this year is the Spanish researcher Alexandra Consejo. The Award consists of a Certificate, waiving the participation fee to ESOF, a grant to cover travel and accommodation for the stay in the ESOF city and a two years’ free EuroScience membership.